A message from the Director:

The 2022 schedule is below and also on our Facebook page.

Our Facebook page has the schedule as well as videos that Trustee Terry Muskoff made. Some are excerpts of our concerts and some are the entire concerts. Also, here is a link to our YouTube  channel.

Check out our "virtual" band video. 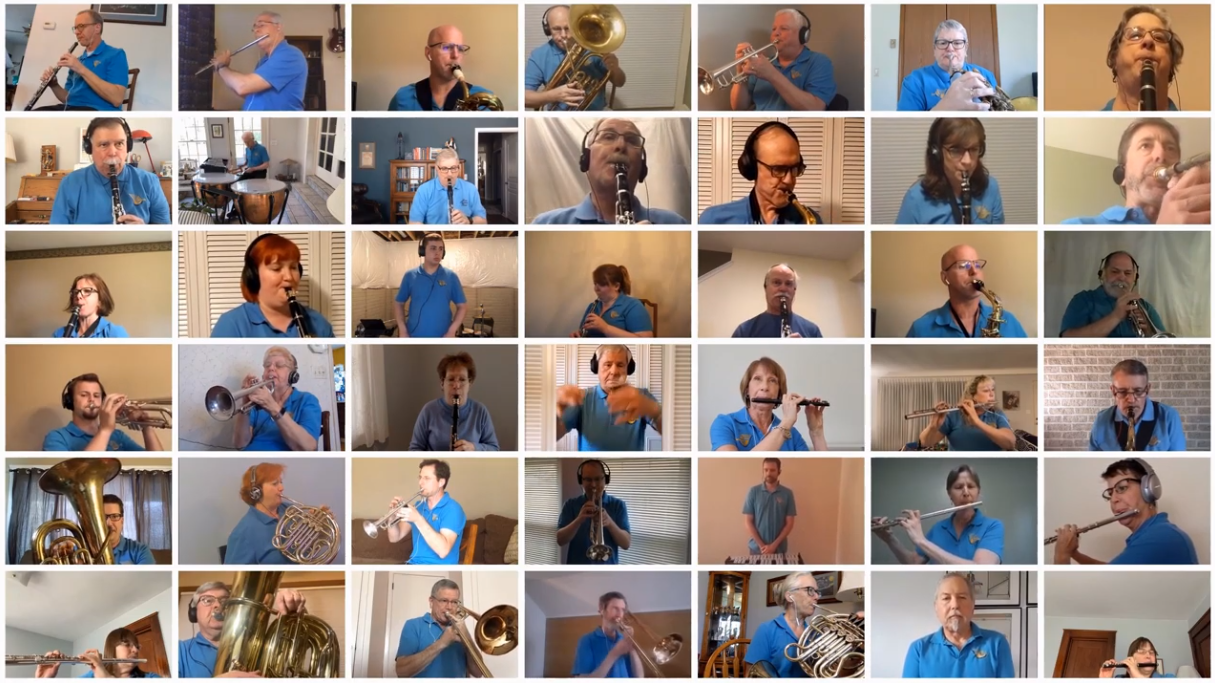 Be safe and stay healthy.
Ken


History of the Band

The Strongsville Community Band was founded in 1990 by director Ken Mehalko. The band received its initial financial support from the Strongsville Women's League. It now has a board of Trustees who set policies and raise and manage monies to support the band's activities.

The City of Strongsville provides the performance and rehearsal areas. The Strongsville Community Band performs six outdoor concerts during the summer months on the front lawn of Strongsville Middle School. Also scheduled in the Cultural Center of the Ehrnfelt Recreation and Senior Center are a Christmas Concert, a Winter Concert and a Spring Concert.

Outstanding musicians from all walks of life, including students, professionals and retirees join together in this community band because of their love for making music. The ensemble programs a variety of musical styles including marches, light classics, popular selections and other contemporary literature from the concert band repertoire.

The band has also performed at other communities in the area including The Lorain Palace Theater with the Patriots Concert Band and at Lakeland Community College with the Lakeland Civic Band and two performances at Severance Hall, the home of The Cleveland Orchestra. Loras John Schissel, Dr. Frederick Fennell, Dr. Howard Meeker and Dr. Gary Ciepluch are but a few of the guest directors who have conducted the band in concert.

Ken Mehalko has been bringing music to Strongsville for over 50 years. From 1961-1990, he served as the Director of Instrumental Music at Strongsville High School. The ensembles he directed...marching band, concert band, orchestra and jazz ensemble received statewide and national recognition for their musical excellence at state contests, music conventions and parades such as the Orange Bowl Parade and the Tournament of Roses Parade.

Ken has also served as a music educator in Chile for the Ohio Arts Council as a guest of the Chilean Ministry of Culture on five different occasions. Retired as Director of Athletic Bands at Baldwin-Wallace College, he graduated from Baldwin-Wallace in 1961 with a degree in music education and holds a master of arts degree from Case Western Reserve University. He is a member of the Strongsville Rotary Club, performs with the Cleveland TOPS Swing Band, is a past member of the Strongsville Education Foundation and has been very active in the Ohio Music Education where he held various offices over the years.
His many honors and awards include: The Baldwin-Wallace Conservatory Alumni Achievement Award; Baldwin-Wallace College Outstanding Educator Award; Strongsville High School Distinguished Alumni Award as a former teacher and a Medical Mutual Of Ohio Outstanding Senior Volunteer Honorable Mention Award for his work with the “Glitz”. He lives in Strongsville with his wife, Beverly Wehr.

Brian D. Maskow has been named Assistant Director of the Strongsville Community Band. A Parma resident, he is the retired Director of Bands at Lakewood High School where he taught for over 30 years. Brian has guest conducted several school honor and festival bands. He is now a part time Educational Sales Representative for Rettig Music. A graduate of Bowling Green State University and Northwestern University, Brian has performed on clarinet and saxophone with the Dan Zola Big Band and the Strongsville City Jazz Swing Band.

He is married to violinist Julie Elliot Maskow, retired Director of Orchestras at Fairview Park City Schools and currently the Director of the New Horizons Orchestra at Baldwin Wallace University.

The Strongsville City Jazz Swing Band is co-directed by Ken Mehalko and Jim Wonnacott. Ken founded the band in 1992. Jim Wonnacott is also a graduate (1964) of Baldwin Wallace College (now University). He retired from the Strongsville City Schools in 1996 where he had success teaching at Center Junior High School. As a freelance musician and arranger he has performed with many prominent bands and entertainers, including The Cleveland Jazz Orchestra, Sammy Davis, Jr., Johnny Mathis, and toured with both the Jimmy Dorsey Orchestra featuring the Pied Pipers, and with singer Al Martino. He is the founder and former Musical Director of the Baldwin Wallace College Alumni Jazz Orchestra. Jim received the 2009 BW Conservatory Alumni Achievement Award in recognition of his accomplishments as a performer and educator in the Cleveland area and his dedication to the Alumni Jazz Orchestra and was awarded the BW Alumni Association Merit Award in May, 2011. On July 11, 2012 the Cleveland TOPS Swingband named Jim as its new Music Director. Jim was inducted into the Euclid High School Alumni Association Distinguished Alumni Achievement Hall of Fame in May, 2013. He and his wife, Marcia, are 48-year residents of Columbia Station.

The Strongsville City Jazz Swing Band is one of the most versatile big bands in the Cleveland area, playing everything from jazz classics to swing music from the big band era. The fine musicians who make up the band bring a variety of musical experience to their performances that include entertaining at Playhouse Square, The Front Row Theater, Kenley Players, and The Coliseum.

Some members of the band have performed with some well-known ensembles, including The Glenn Miller Orchestra, Warren Covington, Buddy Rich, Louie Bellson, and Jimmy Dorsey big bands, and the Cleveland Jazz Orchestra. The band performs during the summer as part of the Strongsville Community Band Summer Concerts and in other area communities. During the winter the band has been featured at a number of Cleveland area high school jazz festivals.

James Wonnacott is also a graduate of Baldwin-Wallace. He retired from the Strongsville City Schools in 1996 where he had success teaching at Center Junior High School. On June 27, 2011 he performed with the Jimmy Dorsey Orchestra at Lake Chautauqua, New York. From July 13-15, 2016 he performed with THE PLATTERS playing five shows in three different cities over the three days.

He is the founder and former Musical Director of the Baldwin-Wallace College (now University) Alumni Jazz Orchestra. Awards include the 2009 B-W Conservatory Alumni Achievement Award, the B-W Alumni Association Merit Award, and the Euclid High School Alumni Association Distinguished Alumni Achievement Hall of Fame. Currently he is the Music Director of the Cleveland TOPS Swingband.

Support the Band - become a patron

Give a gift to your community and yourself by joining one of our "ensembles" this year. The donation levels are:

Listen to the Band

Excerpts from our 3rd CD in mp3 file format. Click on track to play.

It may take a few extra seconds to load the first time you try it.

Someone To Watch Over Me - Gershwin, arr. Wolpe; Kim Wasielewski, vocal